Do you sow seeds or leave a trail of devastation? 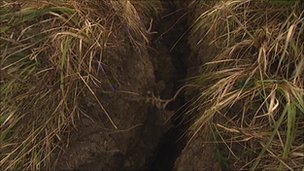 A couple of weeks ago I made a light hearted suggestion to someone (as is my wont), and he took me up on it, with potentially life changing consequences.

I’ve been working on Leadership Skills with managers at Cornwall Council’s Neighbourhood Services Division.  They look after the roads, parks and other local amenities throughout Cornwall.  One of their specialists is Richard Hocking, who is a Geologist.  After the lunch break he asked if he could show a short film that he’d made that  weekend whilst on a cliff walk.  Someone had alerted him to a crack opening up in the cliff path, so he went up to investigate.  Whilst he was there, the cliff collapsed before his very eyes, hurling thousands of tons of cliff into the sea.  Fortunately he had a camera with a video option, and he captured it.  Here it is:

2 weeks later the clip has had 1.7 million hits, and Richard has been on the BBC news, had phone calls from Geologists around the world, and basically been flooded with enquiries.  So much for the day job!  (He doesn’t mind really, he likes distractions as his MBTI preference is for Perceiving!)_

Who knows where it will all end?  Maybe a life changing moment for him.  It’s funny how people pick up on the smallest suggestions we throw into the wind without a moment’s thought of the consequences.  I wonder how much unknown benefit (and indeed damage) we bring to people from the seeds we sow.  Maybe it’s just as well we don’t know – it would probably make us much more self conscious.  There again, perhaps that might not be a bad thing.

I hope you enjoyed the video: spectacular, don’t you think? No, I’m not going to give you Richard’s contact details.  He has a day job to do, after all!